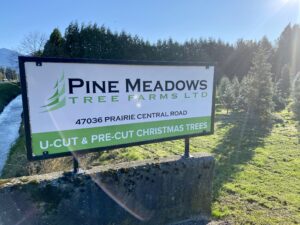 Pine Meadows Christmas Trees – Make Memories With A Fresh Real Tree. There’s nothing better than the look and smell of a live Christmas tree in your home to start the holiday season. Christmas starts with a healthy fresh smelling tree – it makes the home.

From the third week in November to December 23 we open up our family farm to the public so you can wander our 14 acres and find a hand sheared Fir, Pine or Spruce tree for your home. Saws provided. Bring the family and the boots. If you don’t want to saw your tree yourself – no problem.

It’s still an experience to choose one of our freshly cut trees hanging from the ceiling in our barn. Walk amongst the hanging trees – twirl them around – and you’ll find your perfect tree.

Since the 1920s, the Douglas Fir has been a favourite Christmas tree in North America. It outsells all other trees on the west coast but what many people don’t know – it’s not a true fir.

The Douglas Fir has even-coloured blue-to-dark-green needles, a pyramidal shape and sweet fragrance which fills any room and says holiday time is here. The tree’s needles are round, longer than a Spruce and soft to the touch. Outstanding feature of the Douglas Fir: sweet, mild fragrance.

This true fir has pretty bicolour needles. Its needles are glossy dark-green on top with two white-striped lines underneath. Ornaments are just an accent on the Grand Fir’s dense body shape.

The Grand Fir’s needles are flat and there are two rows of needles – on opposite sides of each other. Its branches are stiffer than a Douglas Fir so it can easily showcase medium to large ornaments.

Pronounced “Ka-naan”, the Canaan Fir comes from a seed of a Balsam Fir. Often confused with a Fraser Fir, the Canaan is a true fir with shorter needles which cover the entire branch. It has soft needles, medium in length, with a beautiful medium-green topside and a silvery-white underside.

First discovered by John Fraser, a Scottish explorer and botanist, in the late 18th century the Fraser Fir is very similar in looks to the Canaan Fir.

Darker in colour than a Canaan, the Fraser Fir is a fragrant tree with flattened bicolour soft needles. It’s naturally slender with dark blue-green needles on top and a bluish-silver colour underneath. Its lower branches form in two opposite rows and its upper twigs curl upward forming a U-shaped tree.

The Lasiocarpa is a subalpine fir and one of the slowest growing trees. It’s more blue in colour than a Blue Spruce and its branches are more rigid than a Fraser Fir. It has the most open habit and good for hanging ornaments. Its narrow steeple shape makes it a perfect tree for a small room.

Outstanding feature of the Lasiocarpa: BLUE colour and narrow

The Noble Fir is a wider tree with stiff branches and a open habit like the Lasiocarpa. Over 90% of the Noble’s needles are located on the top half of the tree with very few needles underneath. Given its well-spaced branches, curved slightly upward, lower branches can be seen.

Unique about this tree is its four-sided needles coloured grey-green on top and white-blue underneath. It easily hold your heavier ornaments.

According to folklore, R.A.F. Mosquito planes were built with Noble Fir frames during World War II. 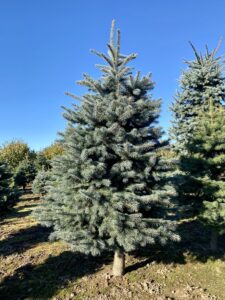 The Colorado Spruce often called a Blue Spruce is known for its range of colours from green to blue. It’s one of the wider trees in shape and has short and stiff four-sided branches which come to a point on the end.

This slow growing tree is highly sought after for its colour and symmetrical shape. Its been known to live as long as 600-800 years in the wild. 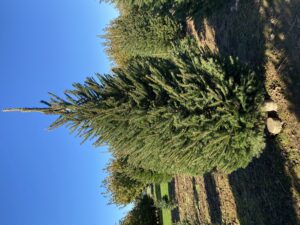 An important species on the European Continent, the Norway Spruce is widely found in western Canada and a Christmas favourite. Its vibrant green needles are short and wrap themselves all the way around the branches making for a dense solid-looking tree.

Our Address and Hours: